Why trekking in Myanmar – Chin State?

Hiking and trekking in Myanmar was, once upon a time, very difficult and only reserved for few people. Finally, in 2015, after years of isolation, the country opened its doors to tourism. It’s now becoming the ultimate destination for trekking, hiking and adventure holidays.

Some of the most popular locations are: Inle lake and Kawal, Putao and the Himalaya foothills, Lashio and the Chin State. Where you can find yourself in thick jungles and stumble upon remote villages with hidden waterfalls.

The Chin State is unlike any other part of Myanmar. Misty hills, small villages, mountains and forests are only few of the things you will experience. The Chin State remains one of the best  “off the beaten path” destination in South East Asia.

LANGUAGE: The main language spoken in Myanmar is Burmese. The Chin state has more than 50 different ethnic groups (out of 135 in all Myanmar), they all speak different languages. Because tourists have only recently been able to explore the country, not many people speak English.

MONEY/ATM: Get some Burmese Kyat before you go. When traveling to the Chin State you will most likely not find any ATMs.

ELECTRONIC APPLIANCES: Find a universal travel adaptor before you leave. Plugs and sockets are all types C, D, F and G. Electricity is very limited in the Chin State. Bring a solar power bank and extra fully charged batteries for your camera/GoPro.

How to get there/around the area

There is a minibus from Pakokku (40 minutes drive from Bagan) to Mindat. It takes 4 to 6 hours. The roads are very small and bumpy. No VIP option available.

If you are looking to explore the Chin state you need a local guide. The treks range from a stroll through the area surrounding Mindat to very challenging remote areas. Outside Mindat no-one speaks English and the roads are still being built. However if you are looking to do Myanmar on a budget you can still enjoy Mindat town and reach the summit of Mt.Victoria (one of the most popular activity in the area) by youself or simply by booking a day tour.

The summer months of July, August and September are very hot with frequent showers and even storms. During winter (October to February) the skies are clear and it rarely rains. Generally this is the best time to visit Myanmar because it’s dry and hot during the day. Temperatures drop significantly during the night, getting close to 0 degrees celsius. Especially if you are trekking in the villages you might want to bring thermals and extra layers. 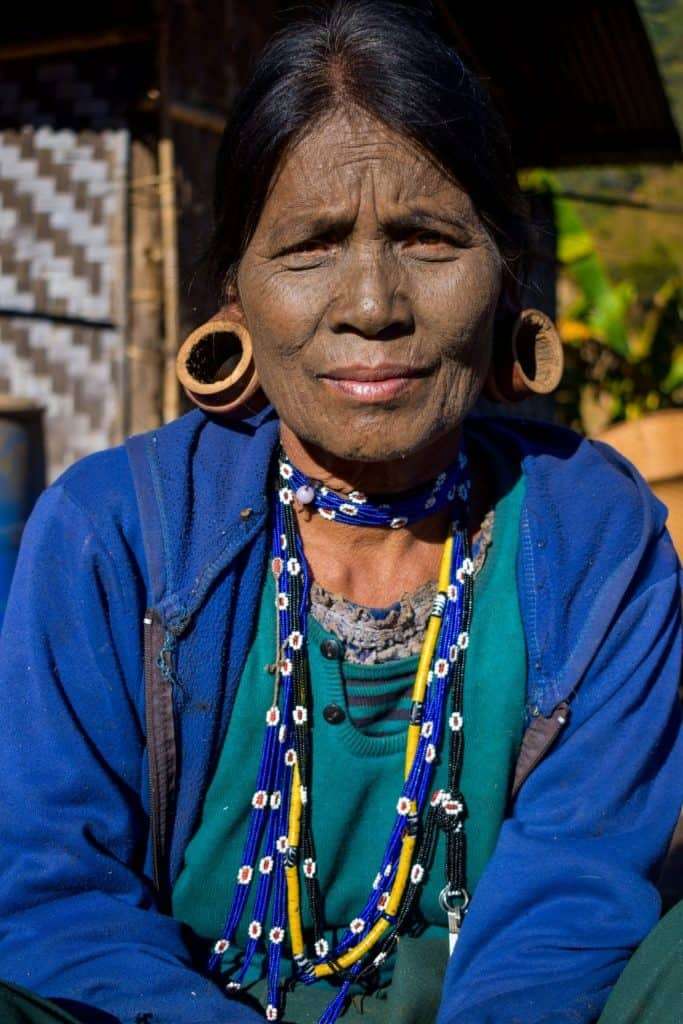 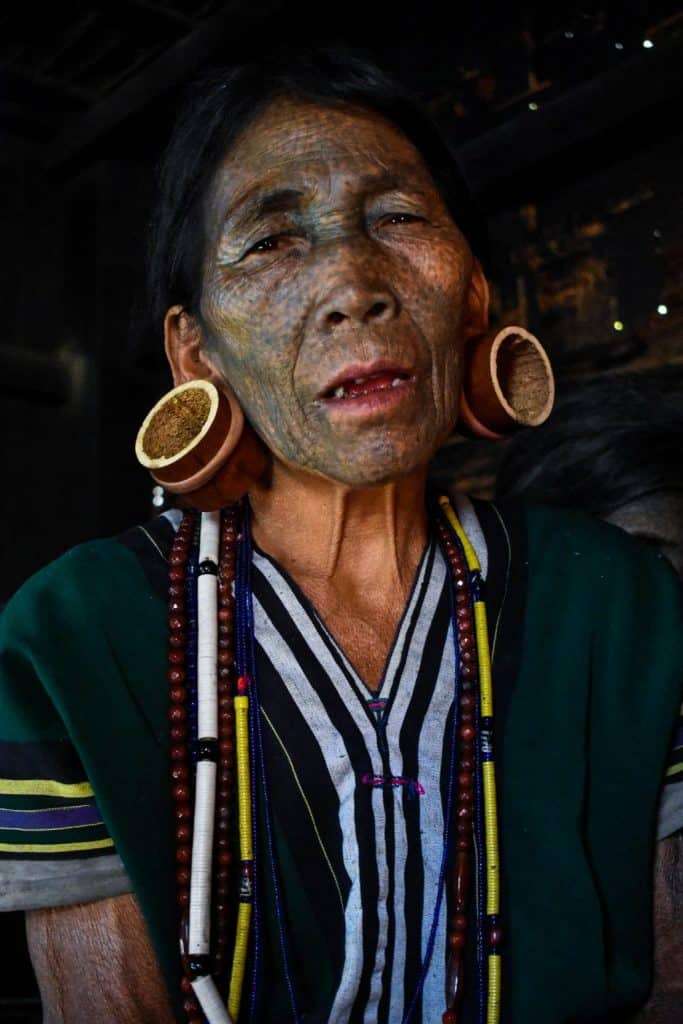 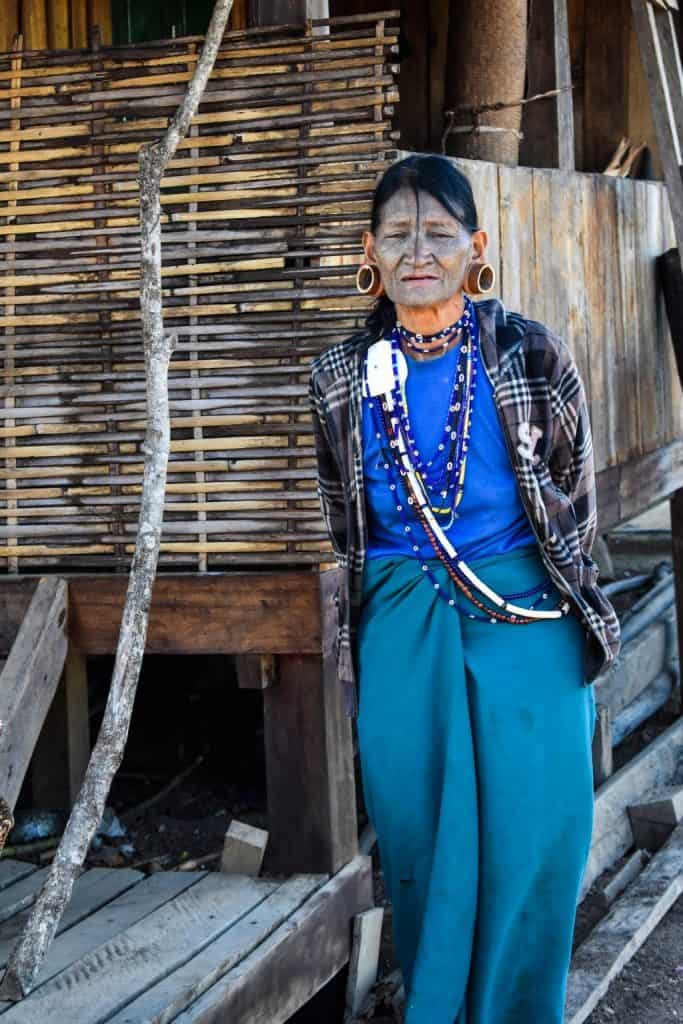 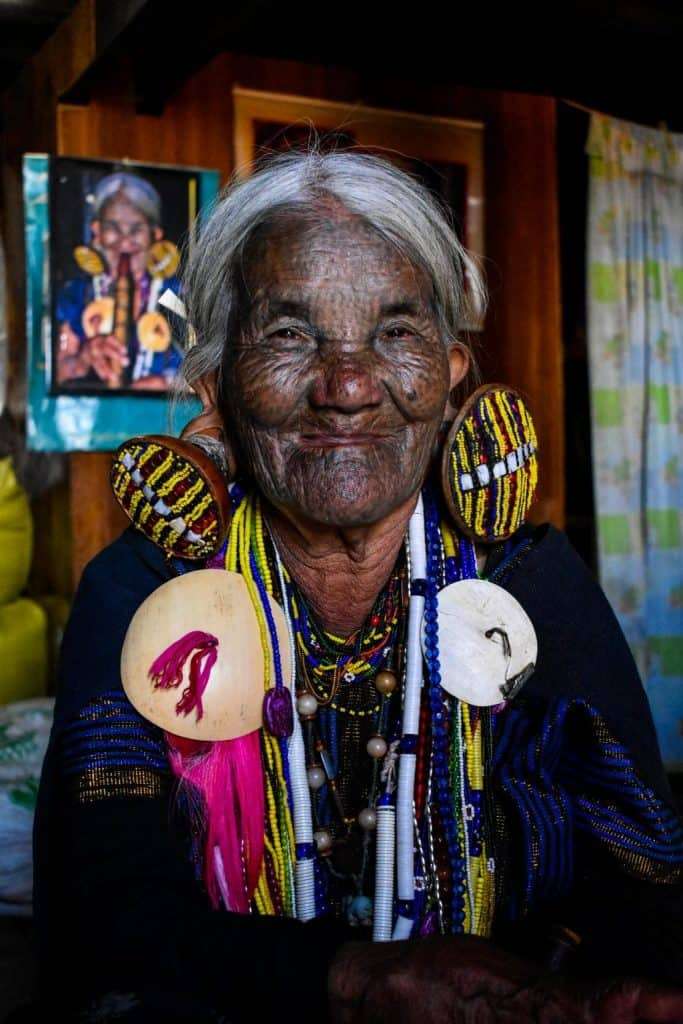 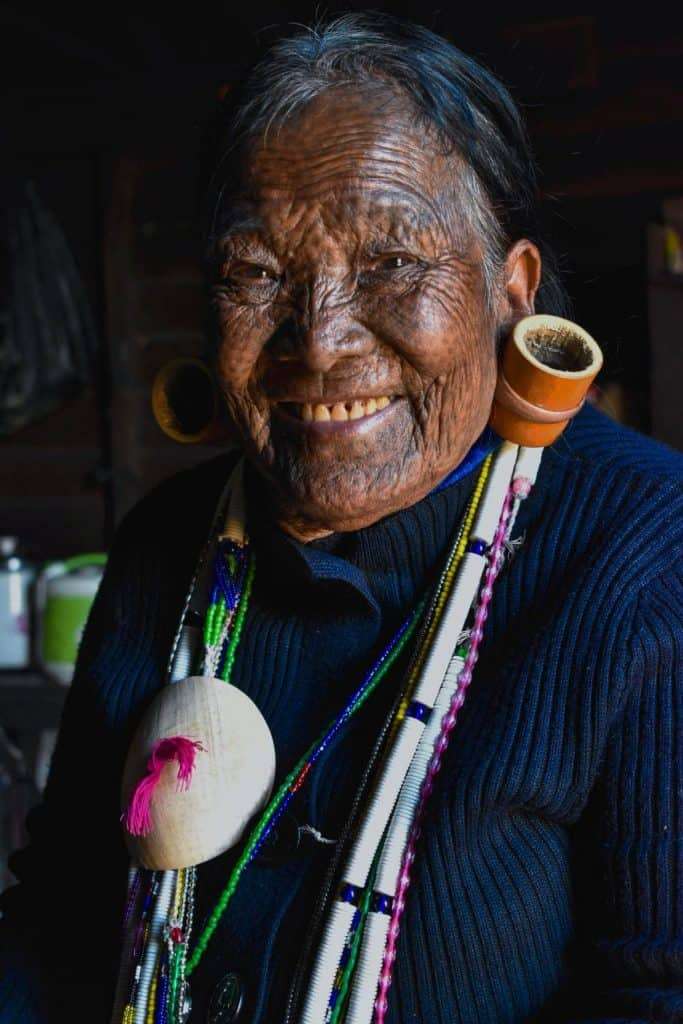 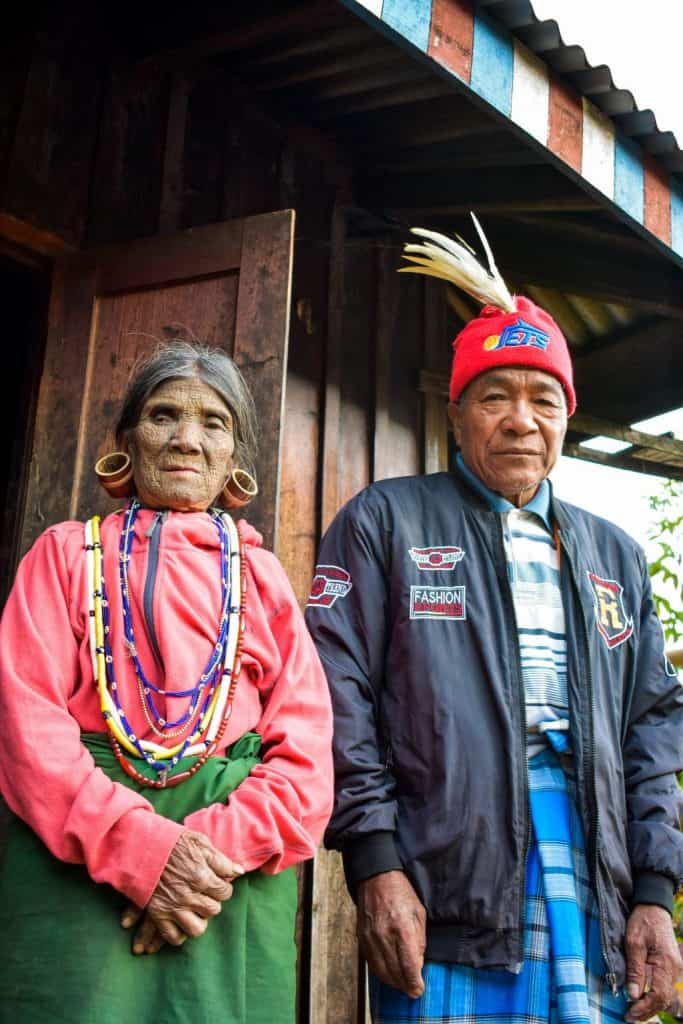 * This trip was possible thanks to Mt.Victoria Trekker and Uncharted Horizons

After a very bumpy bus ride through the hills of the Chin State, I arrived in Mindat. My guide Kee picked me up and introduced me to the team. Soon after we left the city on our motorbikes.

The trek was easy and mostly downhill. We reached an old village just before sunset, started a fire, cooked and enjoyed some typical millet wine. I finally had time to ask a few questions about the traditions, the tribes and the meaning of the tattoos.

The official story is: The Burmese King was known for sleeping with the most beautiful women in the area. To avoid his attention the girls were covering their faces with mud and charcoal… but the King was smarter than that! He simply had the women washed.

Tattooing their faces was the permanent solution.
Unfortunately, their history is difficult to prove. There aren’t any written records and all we know is been passed on verbally.
There are stories that go back to before this Burmese King describing women with a tattooed face, so this tradition could be a lot older.

The Chin state has more than 50 different ethnic groups (out of 135 in all Myanmar), they speak different languages, have different traditions and used different tattoo designs. The Mindat area is characterized by three tribes, the biggest one Muun (Tattoo: B shapes), one called M’kaan (tattoo: Spread out dots) and I was going to explore more about the Dai tribe in the next few days (Tattoo: Very close dots).

After a ridiculously cold night I woke up at sunrise, had a coffee by the fire and started my trek to the next village.

We wrapped our lunch in banana leaves.

On the way, I kept noticing the different animal skulls hanging outside the houses. I found out that families sacrifice mithuns (similar to a buffalo) for a traditional spiritual practice, share the meat with the villagers and hang the animal’s skulls. The other different skulls are hunting prizes used as decoration (wild boar and bears).

We walked over an amazing suspension bridge and stopped by the water to recharge before a long walk uphill (4 hours). Around 5 pm I reached the village where I managed to have a shower (cold water from a bucket) and meet some of the locals.

We spend the evening by the fire, chatting with a local priest and drinking Myanmar whiskey.

The sun was up at 6:45 am and I was ready to start my day. After a long walk and a crazy motorbike ride, I arrived in an old village where I met a couple of locals.

We spent the afternoon drinking tea and millet wine by the fire. The owner of the house was sharing old stories of hunting tigers and bears, homemade weapons and old photos.

5 liters of wine later it was time to say goodbye and get back to where we were staying. Before leaving they offered me a raw chicken egg. Apparently, they are very high in energy and good for physical activity. Lucky I had enough Dutch courage to drink the egg without repercussions.

​It was a very cold night and the village didn’t have any electricity.

I woke up with the smell of burning wood and quickly made my way downstairs to warm up by the fire.

After sunrise, we started our journey to the next village. As it was the last day of challenging trekking we decided to make it more interesting and take a few shortcuts through the virgin jungle. I found some very exciting vines to play with.

Around 3 pm we reached the village, after settling in we took a good look around and found a woman happy to share her traditional chin water pipe with us, the pipe was made out of a gourd (I’m not a smoker and I was very bad at it).

One of the main sources of income in the area comes from growing and drying a particular kind of yam (very itchy) then selling it to China and Japan.

We had dinner by a bonfire and the highlight of the evening was a traditional chin dance (with a single knife) performed by one of the team members after a few drinks.

It took us a couple of hours walking to reach the river.
We started a bonfire and spent the morning swimming in cold water, climbing and jumping off a suspension bridge.

The drive back to Mindat was long but enjoyable. Once in town, I still had the time to visit a couple of women from the M’kaan tribe and see one of them play the traditional nose flute. This woman is over 90 years old and currently the only one in town able to play the nose flute.

The Chin state is a very fascinating place but unfortunately, a lot of the traditions are now disappearing, the Burmese government banned the practice of face tattooing in the 60s, the practice was considered dangerous and barbaric. These women are the last generation.

It was my last night in the Chin state and with the team. It was time to celebrate with a hot shower and experience the local nightlife.
Currys, Myanmar beer and karaoke!

Trekking in Myanmar – Chin State – is an incredible experience, challenging and rewarding. If you found this article helpful and informative please let me know in the comments below.